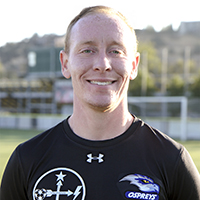 Rusty Veth is an experienced coach and player. Veth is an advocate of continuing education in all forms. He holds coaching certifications with the United States Soccer Federation as well as speed and agility diplomas. Regarding education and soccer at Rogue, Veth said "I'm looking forward to using my knowledge and passion for this beautiful sport on the collegiate stage as head coach for Rogue Community College," adding "I'm really excited to build a program from the ground up and create a foundation for Osprey women's soccer centered around a family atmosphere that's rooted in strong core values."

A native of Washington State, Veth spent his youth and collegiate career playing in the Pacific Northwest. He began his collegiate career at the Northwest Athletic Conference (NWAC) school Highline Community College in Des Moines, Wash. He then transferred to the NCAA Division III school Pacific Lutheran University in Tacoma, Wash. to finish his playing career as an attacking midfielder.

Upon completing his bachelor's degree in business administration at Pacific Lutheran, he spent three seasons (2007-2010) working with the Lutes' women's soccer team as an assistant coach while simultaneously coaching two premier club teams in the area.

After Pacific Lutheran, he spent time volunteering with NWAC institution Olympic Community College in his hometown. He moved to the Midwest in 2012 to complete his master's degree in athletics and activities administration at the NAIA school William Woods University while working with the women's soccer team. While in Missouri, he additionally head coached the girls soccer program at Southern Boone County High School. During the two seasons at William Woods, Veth coached the Owls to 10-8-1 records each year, who subsequently won the American Midwest Conference in 2014. At Southern Boon County High School he took a team that turned out only 14 players to a 8-8-1 record in his first season with the Eagles to a 22 player roster that finished 14-6-1, with 10 shutouts, in his second season with a number two seed to the post season tournament.